The Redsand Towers are an eerie abandon set of Iron structures in the Thames Estuary. Designed by Guy Maunsel in 1943, they were built at Gravesend,Kent and towed out into the estuary by piggy backing a set of barges.

The forts designed for the Army, guarded the skys above the Thames from the German Luftwaffe and V1 and V2 rockets. There were three sets of Towers, The Redsand forts, Shivering Sand Forts and the Nore Sand Towers.

Where are all the Towers?

The Redsands towers lie within the Thames Estuary, 9 miles from Southend and 6 miles from Whitstable. They can often be visable on a good clear day from the shore and often appear as a black dots on the horizon.  From Whitstable, it may be possible to see both the Redsand and Shivering sand Towers next to each other but in reality they are about 5 miles apart.

On our tours, we do not visit the Shivering Sand towers, these are just alittle too far for our liking but in Our opionion the Red Sand Towers are the best preserved.  Once you have seen one set, you have seen them both. 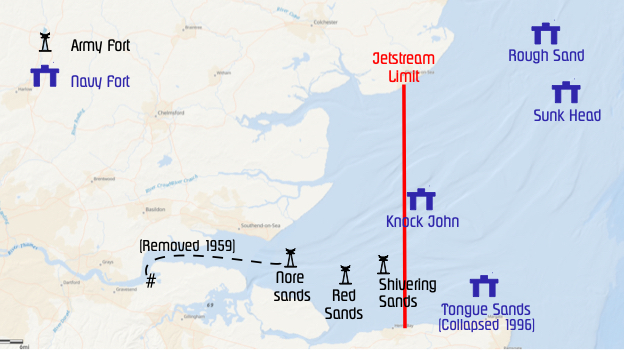 Various operators carry out trips to the Fort with each one carrying out their trips in a variety of different boats from Ribs to tugs and even Thames Sailing Barges. You can join these trips from the following ports; Queenborough, Whitstable, Dover and like ourselves, Southend and Chatham. Whilst we would encourage the use of any of these operators but we would say that most operators are only permitted to operate with up to 12 passengers.

Jetstream Tours's vessel Jacob Marley is the only classed passenger vessel that is permitted by the Maritime Coastgurad Agency to operate out to the Towers. We can carry up to 60 passengers on this trip and this allows for some comfortable veiwing of the towers aboard a stable Catamaran. We have a Bar, Toilet and two veiwing decks with external seating.

Weather is a limiting factor with any tour and with the Towers so far offshore, waves can develop quite quickly. Jetstream Tours will only operate trips out to the Towers if we know that the tour is going to be safe and comfortable for all our passengers. There is nothing worse than going out to sea and becoming Sea sick, or worse, sat next to someone who is.

Whislt each operator has their own limiting factors based on their vessel type and ability, we pride ourselves on our safety record and ensure that every trip to to the Forts is successful, aboard a vessel that is both capable and spacious.

Our Trips depart from Chatham and Southend with occational trips running from Gravesend or Queenbourgh.

Isolated and Decaying in the Thames Estuary

It can be said that the Towers are nearly 80 years old and so their condition is slowly deterorating, and they wont be around forever. The Redsand Towers are the best preserved Fort in the Thames as the Nore sand Towers have been removed and the Shivering Sand Fort is missing a Tower, after it was hit by a passing ship.

Since the MOD abandoned  and dearmed them in the 1950's they have rarely been visited and have only been homes for roosting birds. Due to the fact they are such a distance from shore and out in the open sea, access to them can be tricky. The Redsand Project are custodians of the Towers and are the only persons permitted to board the towers.

These group of enthusiastic individuals head on out to them occationaly and carry out maintainance work on just one of the towers. Preservation works include, replacing windows and repairing steelwork where nessessary to ensure the Towers's survival.

As mentioned previously, the Forts are extreamely exposed and as they are placed on the sand banks, we know that waves can build very quickly. If we feel your trip is likely to be weathered off and need to cancel, it is normally due to the wind. We know that this is disappointing but we have to do this for your safety.

Our Tours are able to reach the Towers and can sometimes experience some pitching and rolling of the boat. We want our tours to remain pleasurable but not to a point where passengers become seasick or require us to turn around as a result. This we have found that generally a wind speed of 15 knots is about the upper most limit of our safe operating windspeed and comfort of our passengers. However, this speed may be affected by wind direction, tidal direction, sea state, visability and fluvial flows. Our captains take all of this into account and can often predict up to 24-48 hours in advance if each tour is to be successful or not.

That being said, sometimes forecasts are not that accurate and conditions on the day are always taken into account prior to departure.

If your tour is cancelled, you will be offered an alternative date and/or the ability to transfer to a gift voucher to use on any future tour. 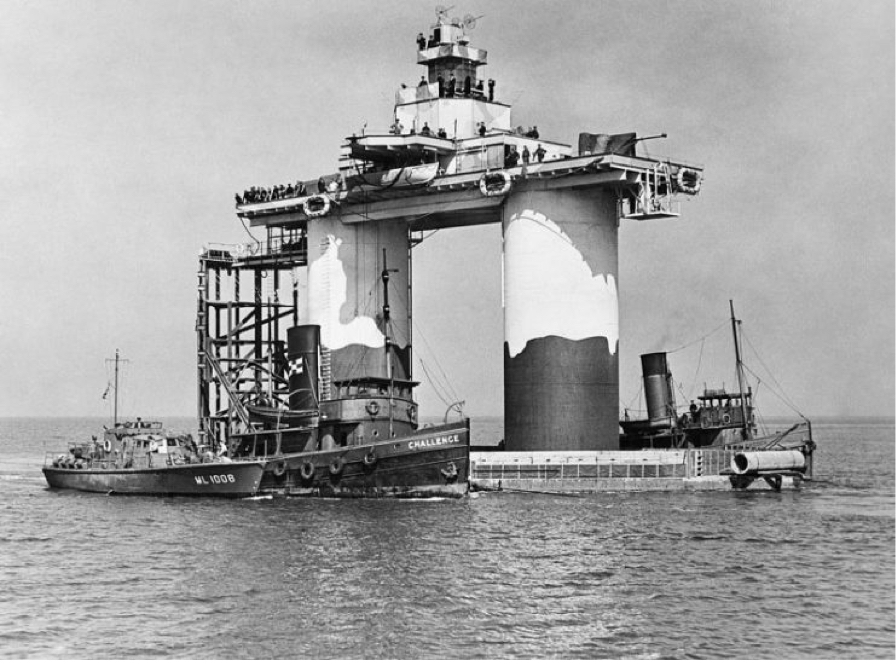 Further out in the Thames Estuary lay the Knock John, Sunk Head and Rough Sands Fort and today are alittle more difficult to see from the shore. Although Guy Maunsell was also entrusted to build these forts, they needed to be alittle bit more robust than the Army forts as they had to deal with rougher seas. These Forts where designed very much like today's modern day oil rigs and sport twin columns rising from the seabed with a single spanning deck. Each fort carried two Vickers 94mm heavy anti-aircraft guns, two 40mm Bofors light anti-aircraft guns and radar equipment to give early warning of enemy approach.

Unlike the Army forts, they were built apon bouyant bases which made the Forts float. This allowed them to be safely towed by several tugs to their final resting place before the sea chests were opened which allowed the sea to rush into the concrete base.This would see the forts settle gracefully onto the sands below. This floating barge idea soon gave rise to Guy Mausells idea of the Mulbery harbour which saw its use in the D-Day landings.

The four navy forts were commisioned in March 1941 and construction started immediately.

The first Fort to be placed was the Roughs Tower in February 1942. It was crewed by 120 Naval personell and saw  service up until 1958. The fort was then left abandoned until 1966, when a local from Southend, Roy Bates, commondeered the fort as it was found to be the only fort that lay outside of UK teritorial limit. The Fort later was renamed Sealand and declared a Principlalituy. Here they printed their own money, passports and postage stamps. Today it is run by Roy's son Micheal however is not manned after a fire devestated the tower in 2006.

The Sunk head was placed on the 1st June 1942. Like many Thames forts the Sunk head was home for a short while to a Pirate radio station "Tower Radio". Although the station failed, smuggling rumors and after the commandering of the Rough Tower by Mr Bates led to the MOD decided that the Sunk Head be destroyed. In August 1967 the Royal engineers blew up the Tower leaving on 6m of the Towers stumps showing.

On the 22nd June 1942 Tongue Sand Fort was positioned just North of North Foreland. It was placed to guard the southern approaches to the Thames Estuary, namly the the Princes Channel. Although managing to sink a German E-boat, the Tower shifted in the sands in the winter of 1947 which led to a 15 degree lean and eventual abandonment shortly after. After years of leaning it finally surcummed to the sea in February 1996 and sank into a soured hole on the sea bed. The Southern Tower stump still remains and can occationally be seen at Low water.

Positioned on the 22nd August 1942 and along with the other naval forts was manned until 1956. During the War, the Knock john Tower was responsible along with the Army forts for shooting down, 22 Aircraft and 30 V2 rockets.  In November 1965 Radio Essex started to broadcast from the Knock John tower and a following a court order and limited funds saw the radio station shut down on Christmas day 1966. 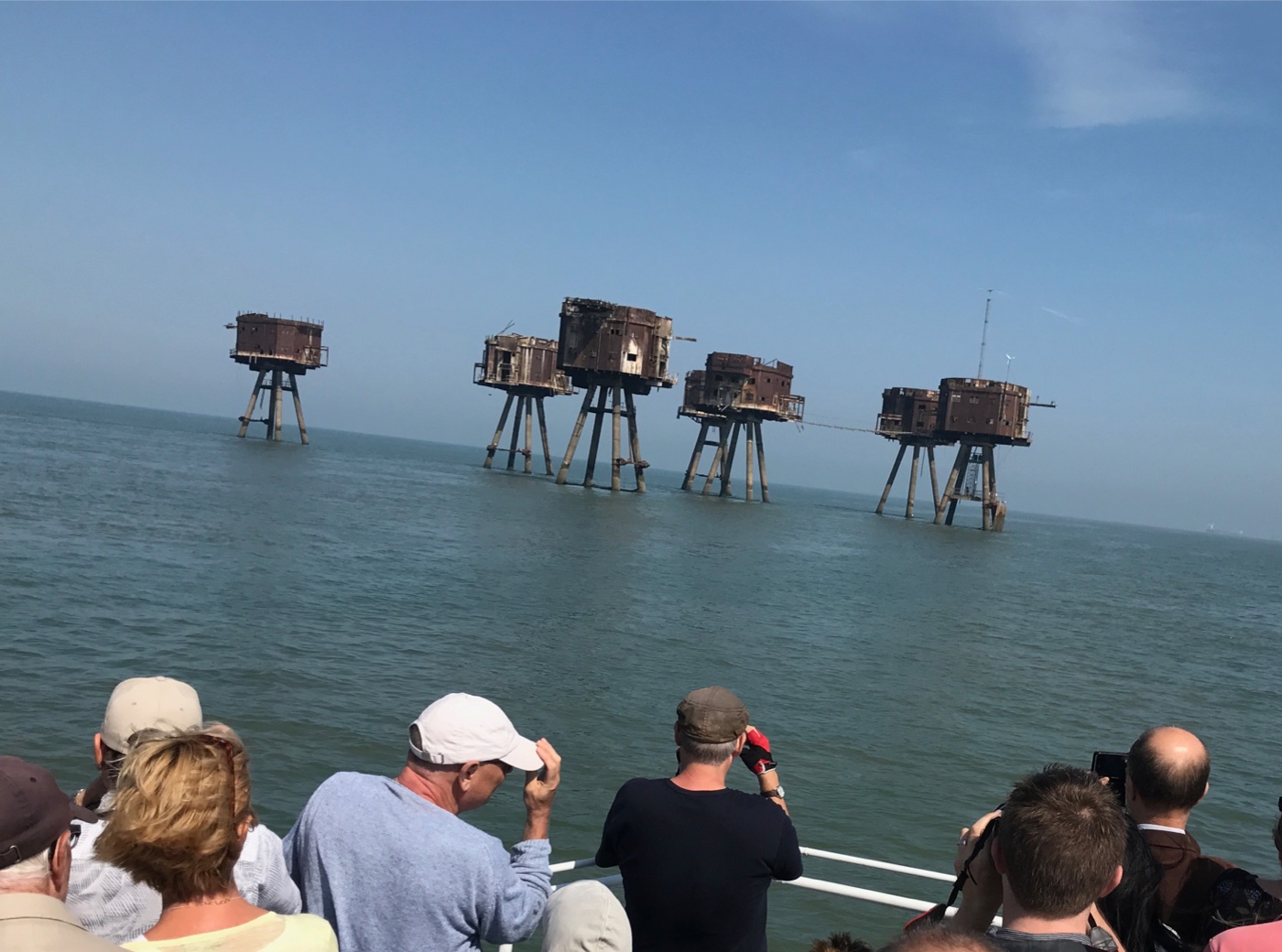 The Nore Sand Fort was originally nestled between the Medway and Thames navigational Channels and were subjected to numerous ship stikes over the years. In particulatar in March 1953, the Norwegien flagged ship "M.V. Baalbek" collided with one Tower (G4) which caused significant damage to the stucture. Parts of the walkways were carried away by the ship and generator cables were severed. In June 1953, the MOD abandoned the fort until repairs were decided upon and carried out, but disaster was soon to stricke again. In 1954, another Tower was contacted by the "M.V. Mairoula" and this time the Towers legs were severely damaged. It was following the two contacts the Nore Sand Towers were deamed a hazard to navigation and so in 1959 the Towers were eventually lifted and taken ashore for scrap. The Remains of the Nore Sand Towers can still be seen on the shore at Cliffe in Kent.

Following Army's abandonment, the Red Sands Fort became the base for Radio Invicta, owned by Harry Featherbee. He began broadcasting in July 1964 as “Tom Pepper” but tragedy struck whenhe along with fellow DJ Barry Hoy and radio engineer Martin Shaw drowned in December 1964 in an attempt to reach the fort. Radio Invicta ceased broadcasting in February the following year.

Red Sands was then occupied by Radio King; and later Radio 390 took over. Radio 390 was the first station to attempt getting all the correct legal authority and permission to allow them to broadcast but a year later was summoned to court and subsequently shut down.

Abandoned in 1958, the Towers have been home to wildlife and the occational Pirate radio station. Whilst the Shivering sands Forts lay to the south of the main shipping channel, it's position was still close enough for the M.V. Ribersborg to plow between the fort destroying one of the towers and droping it into the sea. since June 1963 the Shivering Towers has always remained destinctive as one tower remains submerged. The fact that the Army forts have always had a bad history of ship strikes it didnt phase Screaming Lord Sutch set up Radio Sutch in 1964. However, he soon became bored and handed the project to his friend and unpaid manager Reginald Calvert, who then expanded into all five towers that were still connected and called it Radio City.

By 1967 the British Government had made it illegal for anyone to supply the stations from the UK. This made the stations financially unviable and spelled the end for Shivering Sands and Red Sands being used as bases for pirate radio stations. It was also the demise of the Sunk Head Fort which was destroyed the same year.